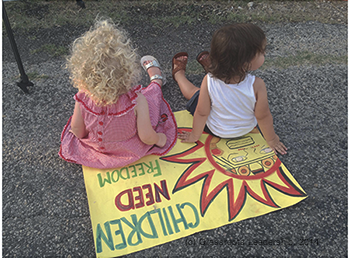 As government delegations gather at the United Nations in New York to celebrate the 25th anniversary of the Convention on the Rights of the Child, migrants’ rights advocates, civil society organizations, and migrant communities are participating in an International Day of Action calling for the end to the immigration detention of children.

Every day, children worldwide experience an array of human rights violations as a result of punitive immigration detention regimes. Held in detention centres, unaccompanied or with their family members, for immigration status violations or separated from detained parents or guardians, these children are deprived of their rights to liberty and family life.

Children who are directly or indirectly affected by immigration detention, in all its forms, are at risk of trauma and abuseand are taught at a young age what it means to be members of a criminalized community. This includes families divided by adult detention.

When community-based alternatives to detention are provided, they should be the least restrictive measures. The practices of detention or mobility restriction and surveillance for immigration status violations are not legitimate, as undocumented children and their parents or guardians pose no threat to the safety or property of the society where they reside. Children should neither be subject to nor forced to witness such measures. The criminalizing stigma and psychological burden associated with detention and its variants run counter to their best interests.

On this International Day of Action to END the Immigration Detention of Children, the Global Coalition on Migration strongly urges governments to prioritize the best interests of the child over other policy concerns, and to follow the advice of the Committee on the Rights of the Child—to “expeditiously and completely cease the detention of children on the basis of their immigration status.”