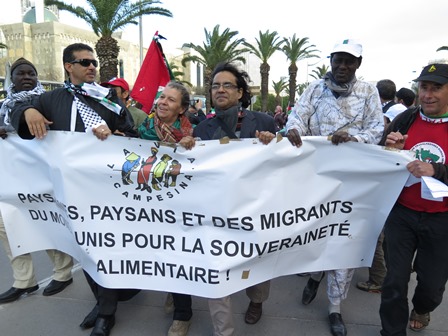 La Via Campesina released a declaration on the occasion of the World Social Forum in Tunis on 25 March 2015.  The declaration includes a call to,

Halt and revoke all policies that criminalize migrants, policies that increase persecution, detentions, expulsions, and physical attacks. States should be obliged to respect international agreements and, if they have yet to do so, adhere to the International Convention on the Protection of the Rights of All Migrant Workers and Members of Their Families. Modify all local and national legislation so as to comply with said agreements.

La Via Campesina is an international movement which brings together millions of peasants, small and medium-size farmers, landless people, women farmers, indigenous people, migrants and agricultural workers from around the world.

March 25, 2015 – World Social Forum Tunis 2015 – The migration of peoples across arbitrary barriers is an integral part of human history. Rooted in the search for better living conditions, this movement of peoples from one place to another was later transformed into a social, economic, and political process that has largely served to benefit ruling elites – the slave traders of the past and the multinationals of the present. Today, as capital demands exceptional freedoms for itself – combined with greater restrictions on the poor – wars, social exclusion, economic injustice, and the global climate crisis are forcing millions of human beings to seek refuge across internationally imposed boundaries.

As financial capital and agribusiness concentrates its power and holdings – diminishing opportunities for diversified and sustainable smallholder farming – precarious livelihoods continue to aggressively push a growing number of rural people off their farms and into the city.

Neoliberal policies, free trade agreements, the development of industrial agriculture, the concentration of production areas… all have destructive effects on the environment, biodiversity, the climate and local, especially peasant, economies. These aggressive policies that impose a development model based on the exploitation of resources, the grabbing of the commons, the stealing of agricultural lands and the exploitation of peasants as well as that of women and men who work the land, have a particularly harsh effect on peasant communities. Ruined people have no other option to leave family, land and community to seek the means of survival some place else, in the big cities or in any countries.

Once urbanized, our people are unlikely to find opportunities in our countries and soon become the migrants of today, the cheap labor of the corporate interests. In the most telling of cases, peasant farmers leave family farming only to become the low-paid agricultural workers of corporate giants Monsanto, Cargill, and DuPont. This occurs both internally – within Mexico or Palestine for example – as well as externally, as we cross borders to work for those who forced us off our lands.

We of La Via Campesina, the world’s largest social movement with millions of peasants, women, youth, indigenous peoples, afro-descendants, fisherfolk and – very often due to involuntary displacement – migrants and rural workers, denounce the fact that we, the poor majorities, are those who suffer most as climate change provokes extreme climatic events across our territories. The term “climate refugee” is now being used to describe those of us forced from our lands by the global climate crisis, by an industrialized food and social system that blames its victims and pardons its culprits.

To advance the struggle for Food Sovereignty and help bring an end to the corporate control of the global food system, we declare that it is necessary to:

We are here in the World Social Forum 2015 in Tunis to let everybody know, that this is our commitment and that we are ready to unite with all the social and popular movements to build an international alliance of peasants, migrant workers, indigenous peoples and social fighters for a more humane, dignify and better world.
—-
Image courtesy of La Via Campesina

The World Social Forum is an open meeting place where social movements, networks, civil society come together to oppose neo-liberalism, a world dominated by capital and any form of imperialism. The Forum provides spaces for rights networks to share expriences and formulate proposals for effective action. Since the first world encounter in 2001, it has taken the form of a permanent world process that seeks and builds alternatives to neo-liberal policies. This definition is in its Charter of Principles, the WSF’s guiding document. The World Social Forum is characterized by plurality and diversity, is non-confessional, non-governmental and non-partisan. It proposes to facilitate decentralized coordination and networking among organizations and movement engaged in concrete action towards building another world, at any level from the local to the international, but it does not intend to be a body representing world civil society. The World Social Forum is neither a group nor an organization.